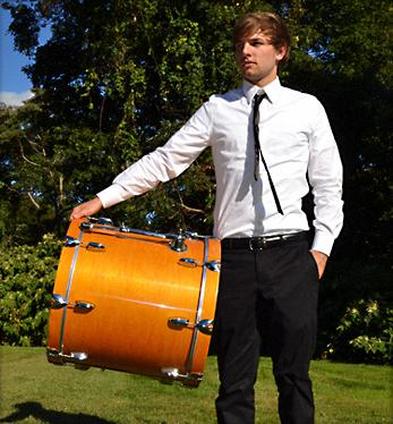 Jeff Hatcher is a young drummer who is fiercely passionate about making music. With roots in the small town of Bakersfield, California Jeff began playing drums at a very young age. He got his first drumset when he was only thirteen and would go on to play drums in his high school jazz band and numerous local theater productions. However, his love of the instrument would eventually lead him out of Bakersfield to New York City to study jazz at New York University. There, under the guidance of a great variety of world-renowned musicians, including Tony Moreno, Billy Drummond, Stefon Harris, John Scofield, Mike Richmond, Robert Dick, Andy Milne, Dave Pietro and Jean-Michel Pilc - Jeff would develop his skills as a professional musician.

Jeff's drive and dedication to his craft have afforded him opportunities to play and collaborate with several of the world's best musicians including Francesco Bearzatti and Andy Gravish. Jeff has also performed at notable venues across the globe including the Blue Note Milan, Catalina's Jazz Club in Hollywood, Torrione Jazz Club in Ferrara, and The Florence International Music Festival. His musical talents have been further developed through his travels to Trinidad and Tobego where he studied Djembe and performed with the country's renowned percussion group Drummers of Tomorrow.

Currently, Jeff is an active member of the New York music scene and performs regularly throughout the Tri-State are playing both drumset and percussion instruments. With a love for all types of music, Jeff can be found playing everything from jazz to pop to hip-hop and R&B. He has acted as both a sideman and a leader in several musical contexts and his professional attitude and musical ability make him a highly sought-after musician and collaborator.